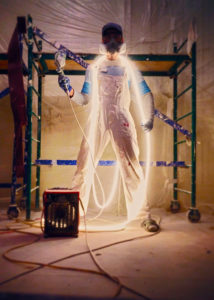 My name is Igor.

From 2004-2013, he painted large canvases with fluorescent paints for Moscow clubs, hanging them as decoration for the space.
03.10.2013 Made the installation “Parade of Planets”

I have been working since 2014
interior decorator.

In 2019 participated in the exhibition “Visionary Art”

Moscow House of Artists, Kuznetsky Most.
In 2020, he completed a one-year skills development course
in painting at the Moscow State Academic Art Institute. Surikov.

from a painting specially painted for the exhibition

in a given topic.

Exhibition Hall of the Moscow Union of Artists

Participated with two jobs. One of which won first place in the nomination Zen spaces and universes (symbolism in cosmogony / cosmism)

We are all parts of the Cosmos.
Knowing ourselves, we know the boundless universe.

Microcosm in Macrocosm.
I mostly write my stories in the style of mystical realism.

I like to mix the unreal with the real. This gives impetus to shift the point of view towards the illusory nature of our world.
I work with acrylic materials in painting technique with glazing effects. The image has depth
which you can peer into for a long time and each time find something new.
With the help of knowledge in the psychology of color,

its influence on the psyche and feelings of a person,

I put my mood into each picture.
I started painting with a passion for airbrushing.
As painting skills improve

and techniques moved to classical painting.
My work is a splashing out of encrypted internal experiences and emotions that happened

during a certain period of life.
I set the game with the viewer in interpretation with hints

“what did the author want to say?”